According to the documentation Kirby should take care of adding a timestamp to the plugin assets.

The css is loaded but no timestamp added to the filename. Do I need to configure something?

I wonder if that only refers to Panel plugins, not frontend plugins. Or are you actually talking about Panel plugins?

For the Panel, it doesn’t add a timestamp but generates a hash, see kirby/src/Cms/PanelPlugin.php: 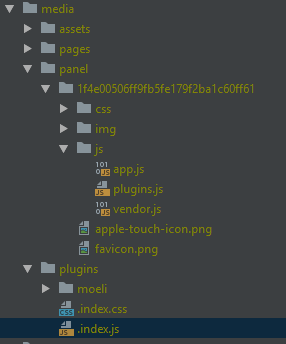 There is a panel folder with that hash containing the Kirby panel core files. But the plugin assets end up in the plugins folder without any hash or timestamp.

I can see what PanelPlugins should do, but something is not working because the plugins folder should endup inside the panels folder with an extra hash.
Maybe related to this bug is that index.css and index.js have a . (dot) in front of their name. 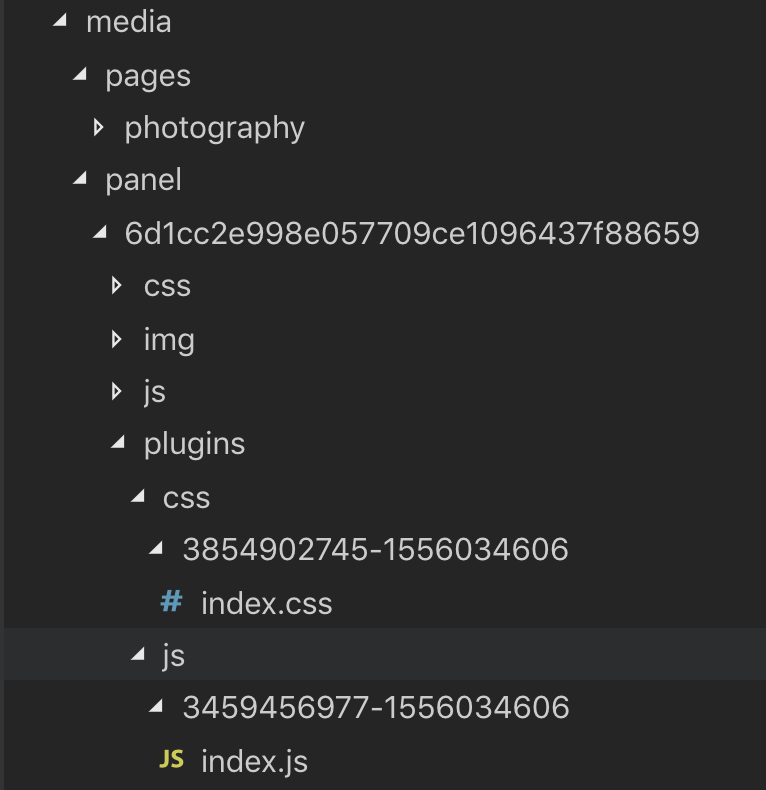 so that looks a bit different from what you have there and indeed doesn’t look like it works as it should.

After updating to Kirby 3.1.3 the panel caching works! (for plugin assets).

Refactored way of loading css and js plugins for the panel with automatic garbage collection of removed plugins.

Not for custom panel css and js though, and the issue with plugin assets in the frontent is still there.

If I try to add a cachebusting string by overwriting the css() / js() helpers, I fail at getting the correct filemtime() because the url the helpers get is a route and not an actual file…any ideas?

Hm, I tested the example from the docs, and it works at least for frontend CSS, plugin assets and @auto assets:

This in the header:

I downloaded a fresh starterkit and added a site/plugins/gallery/assets/style.css.
Then I copied the css component from the link you posted.

When I try this in a template:

An Exception is thrown:

When I open the path in my browser http://localhost/3.1.3/media/plugins/starterkit/gallery/style.css it does show the css file. I noticed that the style.css is not copied to the media folder but seems to be routed to the plugins folder (or loaded from there).

So if I add md5_file(url($url)) it does actually work.
But now I am requesting the file via a http request to md5 it and generate the hash.

Is this a good solution? Would it not be better to access the file via the filesystem?

I’ll have to check tonight what I did differently so that I got it to work.

I can’t make it work with a pure filesystem solution. From the url I cannot guess what folder the plugin is in.

Is this feature from the docs: /media/plugins/superwoman/superplugin/fields/myfield.1520265293.js supposed to work or is it missing?

In my example setup, I’ve put the file into the following folder

But without the custom component, no cache busting added on frontend.

The example from the docs is also not quite correct, it seems, but it refers to a panel plugin.

When I do what you describe, I end up with the Exception thrown from md5_file().
This makes sense because the url I get in the css component is relative but to a file that does not exist.

Is in your setup the plugin.css copied to the media folder?

The example from the docs is also not quite correct, it seems, but it refers to a panel plugin.

I am not sure what the difference would be then between a “Panel Plugin” and a “Frontend Plugin”. As long as I call media/plugins/starterkit/gallery/css/plugin.css it goes the same routing way.

You have already posted issues on GitHub, so I think it’s better to let the devs figure that out.

But the documentation in that regard is definitely not in line with the current implementation.

Thanks for your time @texnixe. Since it is working on your system I kept asking.
I don’t think my opened issues cover this problem.

Here is my working example so that we are on the same page:

ownCloud - A safe home for all your data

Thanks!
That works as long as I don’t touch the media folder. As soon as I delete it and let my machine take care of it, I run into the Exception.
plugin.css is not copied to the media folder anymore

This seems to be the same issue: Symlinks for plugin assets are not working reliable

You are testing this locally, aren’t you? What is your environment?

You are right, symlinks seem to be the problem.

There must be something wrong with symlink() on windows.
Since PluginAssets returns the “original” file’s content if the symlink fails it is no problem as long as you don’t try to actually do something with the file in the media folder. In my case md5_file()

Then maybe wrap an if statement around the md5_file() call.