Hello,
i would like to tell you about something odd i experienced today. I have built a website with a frontpage that contains little images next to text. (www.ikob.be), which isn’t really a special thing.
But: somehow one image was always missing. In the inspector in Chrome i could see that it was in the code, but had an inline style that said: display: none
Now, i had not written that and it was unclear where it came from. In Firefox and Safari, it seemed fine (visible). To make a long (search-)story short: It was my adblocker, who was doing this.
After a little research, i found this:
https://stackoverflow.com/questions/17255493/how-to-stop-adblock-plus-blocking-images-in-html-page

with common ad dimensions in the file name, e.g. ‘myimage_720_90.png’ or ‘myimage_300x250.jpg’.
with common ad keywords in their path (and file name), e.g. banners, adv, ad.
maybe other filters that analyse CSS or HTML

my image happend to have a dimension that would be 300 x 250 px because i had thumbnails being made with a width of 300px.

i am not sure what to make of this, but it is a strange feeling that an adblocker potentially renders images invisible because their filename says: 300x250
my workaround this time was to cut a bit off, so now the filename is 300x249
for the future i guess its best to create thumbnails with odd numbers, like 299 instead of 300px…

Why do you scale this THREE pictures to a bigger size as the thumbnails have? 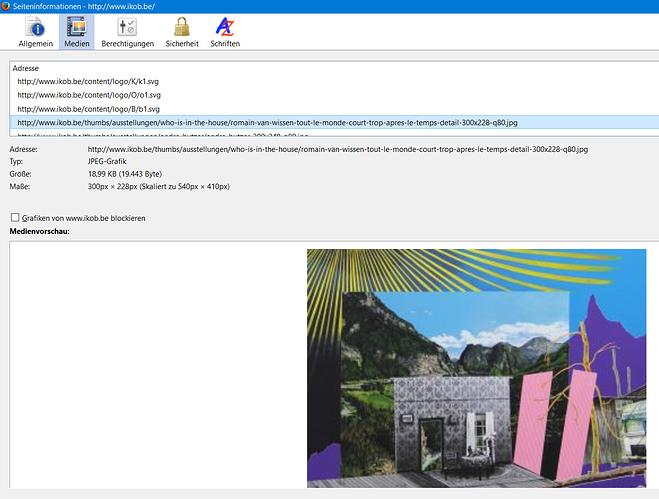 Chrome has some ugly bugs, I think you have found one. May be a favicon.ico is missing on your webpages???
Hint: Add it, and your missing picture has gone…

Does this happen with every file of that size, even no thumb? Even if the thumb does not have a reduced quality, i.e. if the filename just ends in “300x250”?

I tested this and it seems the image only disappears if the quality is set, not with a standard thumb of the same size.

Has nothing to do with a missing favicon, that’s another issue (mission favicon and sessions), unrelated in this context.

Apart from that: Browser add-ons can have all sorts of weird effects, almost impossible to control.