After upgrading OS X, I’m having permissions issues with my local Kirby installs. I don’t recall what the group was before, but now it’s set to staff.

sudo chown _www [files] is doing the trick, but I’m not super knowledgable about how these groups work - is this the correct group?

Which web server are you using? MAMP or the built-in one?

Also, i might need to be chgrping, not chowning, now Grunt doesn’t have permissions to write some files

Yes, you should set the group to _www. More details and a complete tutorial over here for example.

Thanks & thanks for the quick reply!

Setting it to _www didn’t fix the problem because this wasn’t actually the problem! The OS X update reverted some changes I had made to httpd.conf.

This was the solution:

Sorry for the trouble!

Dear community, I’m also experiencing this problem, though I couldn’t solve it yet.

I’m on latest OSX, I’m using the built-in apache server and all my websites are located in ~/Sites/ … (without using userdir, though) … my apache conf looks partly like this:

So, on my webserver everything is perfect. When I’m mirroring the sites locally to e.g. ~/Sites/somesite.dev via rsync -avvr, so with same permissions, I cannot access the panel.

See attached the screenshot of my panel. As said, on the server with the same permissions everything works fine. And it’s really only about the panel, the site itself can be accessed via localhost/somesite.dev … 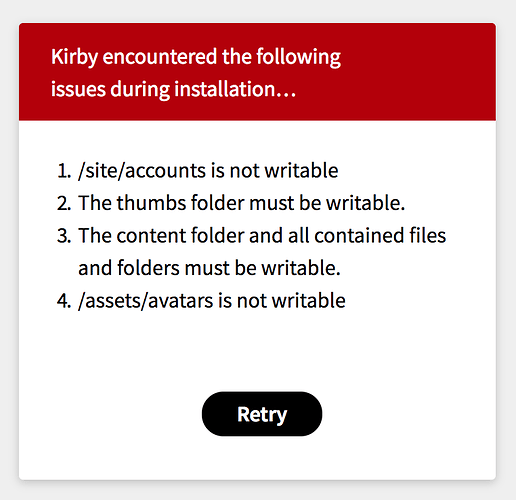